Robert Indiana was born Robert Clark in New Castle, Indiana. He spent the first 17 years of his life living in Indiana moving frequently between cities and eventually lived in 21 different homes. After his parent divorced, he relocated to Indianapolis to live with his father so he could attend Arsenal Technical High School (1942-46). After serving for three years in the United States Army Air Forces, he studied at the Art Institute of Chicago (1949–53), the Skowhegan School of Painting and Sculpture in Maine (summer 1953) and Edinburgh University and Edinburgh College of Art (1953–4). He returned to America in 1954 and settled in New York City. There he began making art with his distinctive “hard edge” style. 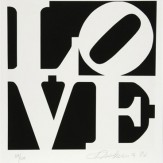 The Book of Love 1 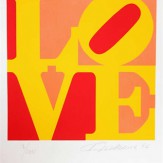 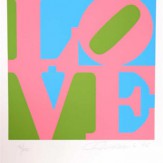 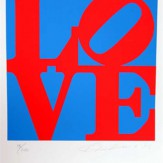 The Book of Love 2